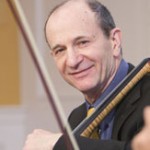 Jonathan Miller (Artistic Director, cello) studied literature at the University of California at Berkeley. After attending a Pablo Casals master class, he dropped out of school to study the cello. Two years later was accepted as a scholarship student at Juilliard School, and then became a pupil of Bernard Greenhouse. Mr. Miller has performed as soloist with the Hartford Symphony; The Boston Pops; The Cape Ann Symphony, North Shore Philharmonic, Newton Symphony, San Diego Symphony, and the Metropolitan Symphony Orchestra of Boston. Miller won the Jeunesses Musicales auditions, twice toured the US with the New York String Sextet, and appeared as a member of the Fine Arts Quartet. He performed as a featured soloist at the American Cello Congress in the spring of 1990 at the invitation of Rostropovitch, and also a soloist at the 1996 Congress. Miller has over the years collaborated in many chamber music concerts with distinguished musicians including: violinists Renaud Capucon, Eugene Drucker, Hillary Hahn, Daniel Phillips, Gil Shaham and Joel Smirnoff; violists Yuri Bashment, Roberto Diaz, Paul Doktor, James Dunham, and Kim Kashkashian; and pianists Emanuel Ax and Garrick Ohlson. He is a member of the Gramercy Trio, which has twice received glowing reviews in the New York Times for its New York City performances. The Gramercy Trio has recorded for Naxos, Navona, and Newport Classics labels. Miller has recorded the complete Beethoven Sonatas with Randall Hodgkinson for the Centaur label. He performs on the ex-Pagannini-Piatti Goffriller cello which was made in Venice in 1700 and a bow by Boston maker Beniot Rolland. Jessica Bodner is the violist and founding member of the Grammy award-winning Parker Quartet. In 2014 she joined the faculty of Harvard University's Department of Music in conjunction with the Parker Quartet's appointment as the Blodgett Quartet-in-Residence. Jessica has appeared at the International Viola Congress, as a guest of the East Coast Chamber Orchestra, and been a finalist for a Pro Musicis Award. With the Parker Quartet, Ms. Bodner has recently appeared at Carnegie Hall, The Library of Congress, the Amsterdam Concertgebouw, and the Seoul Arts Center, and has appeared at festivals including Caramoor, Yellow Barn, Perigord Noir in France, and Mecklenburg-Vorpommern in Germany. A native of Houston, Jessica began her musical studies on the violin at the age of two, and then switched to the viola at the age of twelve because of her love of the deeper sonority. She holds degrees from New England Conservatory, where her primary teachers were Kim Kashkashian and Martha Strongin Katz. 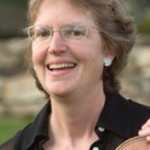 Violist Lila Brown is co-founder and artistic director of Music from Salem since 1986. After graduating from the Juilliard School she joined the Boston Symphony. She subsequently left to study with Sandor Vegh and become principal violist of the Camerata Academica in Salzburg under his direction. Ms. Brown then spent seven years as an assistant professor at the Vienna Hochschule, six years as a member of the Ensemble Modern in Frankfurt and since 1997 is professor of viola at the Musikhochschule in Duesseldorf, Germany. Ms. Brown has taught chamber music and viola courses in Sweden, Austria and Germany. Born and raised in New York, Tatiana Dimitriades earned her bachelor's and master's degrees, and an Artist Diploma, from the Indiana University School of Music, where she was awarded the Performer's Certificate in recognition of outstanding musical performance. A recipient of the Lili Boulanger Memorial Award, Ms. Dimitriades has also won the Guido Chigi Saracini Prize, and the Mischa Pelz Prize. Ms. Dimitriades joined the BSO in 1987. She teaches at the Boston Conservatory of Music, and is the concertmaster of the New Philharmonia Orchestra. Her solo performances have included a Carnegie Recital Hall appearance sponsored by the Associated Music Teachers of New York and an appearance as soloist in the Mendelssohn Violin Concerto at the Grand Teton Music Festival. 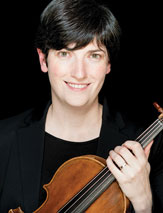 Rebecca Gitter began violin studies at the age of seven and viola studies at thirteen. In May 2001 she received her bachelor of music degree from The Cleveland Institute of Music where she was a student of Robert Vernon. While at CIM, she was the recipient of The Institute’s Annual Viola Prize and the Robert Vernon Prize in Viola. Among other honors, she was the 2000 recipient of Toronto’s Ben Steinberg Jewish Musical Legacy Award. Rebecca joined the viola section of The BSO in August 2001. Randall Hodgkinson won the International American Music Competition in 1981 and his October 1986 formal New York recital debut at Alice Tully Hall under the competition’s auspices was greeted with critical acclaim. Mr. Hodgkinson has, in recent years, performed with orchestras including those of Philadelphia, Atlanta, Albany, Buffalo, Westchester, Oakland, and Caramoor and has collaborated with such conductors as Leonard Bernstein and Gunther Schuller. 1985 saw his European orchestral debut with the Santa Cecilia Orchestra of Rome. He is a featured artist on the Bosendorfer Concert Series aired over WNYC - FM in New York City and has recorded for the Nonesuch, CRI and New World labels. Mr Hodgkinson studied with Veronica Jochum and Russell Sherman at the New England Conservatory where he now serves on the faculty. He is a member of the Gramercy Trio. 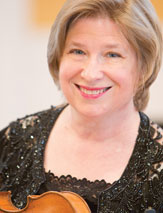 Bayla Keyes studied at Curtis and Yale and was a founding member of the Muir String Quartet. Her recent concert highlights include the Bargemusic series in New York City, solo appearances with the Richmond, Concord, and Ohio Chamber Symphonies, and premieres of concertos by Bernard Hoffer and Richard Festinger. Ms. Keyes teaches at Boston University where she is co-chair of the String Department, and at the Tanglewood and Interlochen Music Festivals. She had recorded for Video Artists International, Ecoclassics, CRI, Musical Heritage, EMI-France and New World Records. 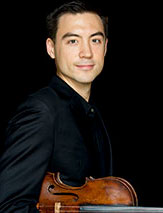 Violist Danny Kim joined the BSO in 2016 and was appointed 3rd chair of the viola section during the 2017-2018 season. He earned his master of music degree in viola performance from Juilliard, studying with Samuel Rhodes. Mr. Kim completed his undergraduate degree at the University of Wisconsin-Madison, where he studied with Sally Chisholm, receiving a B.A. in viola performance and a certificate in East Asian Studies. An alumnus of the Tanglewood Music Center, where he won the Maurice Schwartz Prize, he has participated in such festivals as the Pacific Music Festival, Lucerne, Aspen, and Marlboro and has toured with Musicians from Marlboro. Mr. Kim appeared on Sesame Street with conductor Alan Gilbert and participates in the BSO’s Concerts for Very Young People at Boston Children’s Museum. As an avid chamber musician, he has performed with the Chamber Music Society of Minnesota, Concordia Chamber Players, and Pro Arte Quartet. Julianne Lee is a member of the Boston Symphony Orchestra and has recently been awarded the Presser Music Award. Ms. Lee made her solo debut at age 7 with the Lake Placid Symphonietta. She has appeared as soloist with the KBS Symphony Orchestra in Korea and the Baden-Baden Philharmonie in Germany. Ms. Lee has participated at the Marlboro Music Festival, Santa Fe Chamber Music Festival and a European tour with the Australian Chamber Orchestra as Guest Principal Violist. She holds a Bachelor's Degree in violin performance and a Diploma in viola performance from the Curtis Institute of Music, studying with Victor Danchenko, Joseph Silverstein and Joseph DePasquale. Currently she is pursuing her Masters Degree as a student of Donald Weilerstein and Kim Kashkashian at the New England Conservatory of Music. 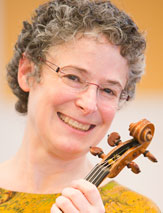 Sharan Leventhal has built an international reputation as a champion of contemporary music. Her more than 100 premieres include works by Schuller, Kraft, Oliveros, and Bainbridge. Her recordings include the entire violin and piano works of Virgil Thomson on the Northeastern Recordings label. Ms. Leventhal has appeared as a soloist with the Boston Pops, the Boston Ballet and the Milwaukee and Vermont Symphonies. She was a founding member of the duo Marimolin, is a member of the Gramercy Trio and has served on the faculty of Michigan State University. 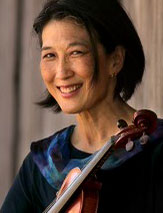 Lucia Lin currently enjoys a multi-faceted career of solo engagements, chamber music performances, orchestral concerts with the BSO and teaching at Boston University’s College of Fine Arts. Ms. Lin first made her debut at age eleven, performing the Mendelssohn Concerto with the Chicago Symphony and then went on to be a prize winner of numerous competitions, including the prestigious International Tchaikovsky Competition in Moscow. Joining the BSO at the age of 22, she has also held positions as acting concertmaster with the Milwaukee Symphony and Concertmaster with the London Symphony Orchestra for two years. Ms Lin is a founder of the Boston Trio and a member of the Muir String Quartet. A passion for the other arts has prompted her to look into creating projects that make connections across the arts, most recently “In Tandem”, an initiative dedicated to bringing new voices to classical music through commissions of ten composers. 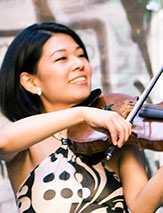 Ayano Ninomiya is a winner of numerous prizes including the Walter Naumburg International Competition, Tibor Varga International Competition, Astral Artists National Auditions, Young Performers Career Advancement, and Lili Boulanger awards. She has performed with orchestras across the U.S., Switzerland, Bulgaria, and most recently in Carnegie Hall, as well as at Marlboro, Ravinia, Moab, Bowdoin, Kingston, Adams (New Zealand), Canberra, and Prussia Cove (England) festivals.  Ms. Ninomiya has been featured on Musicians from Marlboro tours in the U.S. and France, and gave a TEDx talk in 2012 at the University of Tokyo.  She was first violinist of the Ying Quartet and was Associate Professor at the Eastman School of Music until 2015 when she joined the violin faculty at NEC.  As a recipient of the Beebe Fellowship, Ayano studied in Budapest, Hungary, at the Liszt Academy after graduating from Harvard University and The Juilliard School 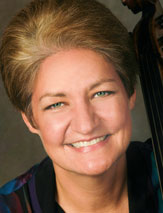 Marcy Rosen made her concerto debut with the Philadelphia Orchestra at age eighteen. She was a member of the Cantelina Chamber Players and the Mendelssohn Quartet in 1986 when they made their recording debut with String Quartet No. 11 (Dvořák), Op. 61. She has since appeared with the Dallas Symphony, the Phoenix Symphony, the Caramoor Summer Music Festival Orchestra, the Orpheus Chamber Orchestra in Carnegie Hall, the Jupiter Symphony and Concord Chamber Orchestra at Alice Tully Hall, and the Tokyo Symphony. Rosen has served on the faculties of the North Carolina School of the Arts, the Eastman School of Music, the New England Conservatory of Music and the University of Delaware. She has acted as the artistic co-director of the Chesapeake Chamber Music Festival. As of 2014, Rosen was Assistant Professor of Cello at the Aaron Copland School of Music at Queens College and on the Faculty at the Mannes College of Music in New York City, as well as continuing to perform and record professionally. 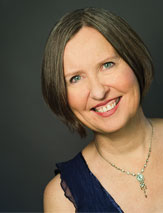 Pianist Diane Walsh, whose many awards include the top prizes at the Munich ARD Competition and the Salzburg Mozart Competition, has performed concertos, solo recitals and chamber music concerts worldwide. She has appeared with the Munich, Frankfurt, Stuttgart and Berlin radio symphonies, the American, Indianapolis, Austin, Delaware, Syracuse and San Francisco symphonies, and Orpheus, St. Luke's and Prague Virtuosi chamber orchestras. She has given recitals in major venues in the United States, Canada, South America, Europe and Russia, and has made summer festival appearances at Marlboro, Santa Fe, Bard, Chesapeake and many others. She led the Skaneateles Festival as artistic director from 1999 to 2004. Ms. Walsh has performed Beethoven’s Variations on a Waltz of Diabelli well over 200 times, in the Broadway production of 33 Variations, a play by Moisés Kaufman starring Jane Fonda, and in three other productions in Washington, La Jolla and Los Angeles. She can be heard on eighteen recordings; her latest release is a selection of Bach keyboard suites. She was associate professor at Mannes College of Music for 32 years, and in the Fall of 2015 was Visiting Artist at Colby College. She is a Steinway Artist. Diane Walsh lives in Portland, Maine with her husband, the writer Richard Pollak.